What the heck is this?

That was my first impression after hearing about this. And I guess most of the folks (like me) haven’t heard a sh*t about e10 fuel before?

It is the most recommended for lawnmowers and other outdoor items such as trimmers, leaf blowers, and chainsaws.

Can chainsaws run on e10 fuel?

Let me explain this whole topic, but first, you need to know how all this works.

So What is e10 fuel anyway?

Nowadays, E10 fuel has become popular for chainsaws. Here e10 means that a fuel that contains only 10 percent ethanol and 90 percent fuel in it. Ethanol is an alcohol-based fuel prepared from the fermentation of different plants such as barley, sorghum, wheat, corn, and sugar cane.

What are the advantages and disadvantages of using e10 fuel?

Can we use e10 fuel to run chainsaws?

Yes, but According to research, if you use e10 fuel regularly (refilled with fresh fuel) and keep your saw running on end, then you don’t find any problem running chainsaws (whether it is 5% or 10% ethanol content).

On the other hand, you may experience problems in the engine sections that make it worse to use e10 fuel to run chainsaws. You may find plenty of choices while using e10 fuel, especially to run chainsaws.

Experts undoubtedly recommend using e10 fuel to run all STIHL chainsaws and power tools because it can improve fuel efficiency.

Is Ethanol a good fuel to use?

We have mentioned……… ethanol is produced from natural plant fermentation, such as produced by biomass. The most significant benefit of using ethanol (renewable fuel) is it can lower greenhouse gas emissions.

It is a renewable fuel that can reduce greenhouse gas emissions.

Besides, the natural grains used in its preparation can absorb Co2, making it an eco-friendly fuel.

How does ethanol work?

Ethanol could be used as a fuel, but you will need to mix it with gasoline in a specific percentage to improve gasoline and overall fuel performance. Different ratios were tried, such as E10, E5, E85, but e10 was more beneficial than other mixes.

During the heating process, ethanol evaporates in vapors, and the remaining solid materials remain available. On cooling, vapors turn into liquid and burn as other fuels to generate power for the engine. 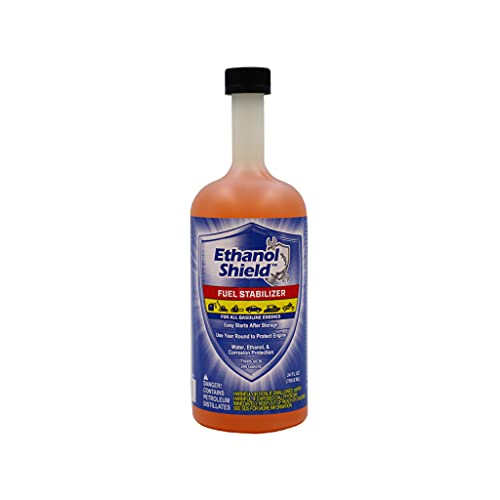 Why is ethanol not good to use to run chainsaws?

Ethanol is a hydroscope in nature; it means it attracts moisture that creates problems in the engines.

After using it for a couple of months, the remaining ethanol content in the engine attracts moisture in the fuel. That is why we see condensation inside gasoline that is hard to keep open.

Fuel attracts the moisture in all parts of the engine or the paths from where it passes, such as in carburetors, making them unusable and causing corrosion, etc. You know corrosion damages the metal parts and also affects their performance badly.

What does this mean?

So using e10 fuel for the chainsaw may improve the performance of gasoline, but after a couple of months, you will see its negative impact on the chainsaw motor or engine.

What fuel do I put in my chainsaw? It may be removed through cleaners, but it causes severe blockage most of the time, and you need a replacement to repair all the carburetor systems. But if you want to use e10, then specific actions can reduce its negative impacts.

Ways to use the exact fuel mixture for better use of e10 fuel to operate chainsaws:

Of course, thinking like running an engine without fuel is worthless talking, and this is the same for operating chainsaws because they are engine-powered tools.

According to research, maximum chainsaws come with double engines that demand an exact fuel mixture.

The exact fuel mixture ratio plays a significant role in enhancing the performance of the power device (chainsaw) you choose for your project. But if you don’t know how to use the exact fuel mixture for better use of e10 fuel to operate chainsaws, read the following tips.

You must choose a safe fuel storage pot or container:

The most significant problem is that the storage container is too dirty. This is why you should choose a container that is clean enough to carry the fuel. Choosing a safe and clean container for storing fuel substances is indeed a matter of high attention.

Only buy the fuel which is specific and available for running chainsaws. Never use plain fuel; always use two-stroke better quality fuels with ethanol. Make sure the specification of mixing of fuel is perfect.

You may also use e5 fuel instead of e10; no worry, you can use e5 or e10 but do not use e15 or higher. Otherwise, you may damage your chainsaw engine.

How can I know that my chainsaw is fine with e10 fuel?

According to the auto expert, a double stroke or four-stroke chainsaw engine is suitable for e10 fuel.

Besides, you can know more details on the chainsaw manual about fuel compatibility. You should contact an expert if you find any problem or if you don’t find the proper direction. Thus, you can protect your chainsaw engine from damage.

What do you need to do while filling e10 fuel in an incompatible chainsaw engine?

Try to pay deep attention while filling an incompatible e10 chainsaw container/tank. Ensure you remove the dirty gasoline fuel and use the clean substance.

According to a study, using 1 to 2 times e10 fuel is safe and recommended, but you shouldn’t continue it regularly because it will ruin the engine of your chainsaw.

Quick question: Can I use e10 fuel in all Chainsaws?

Traditional gasoline is not friendly to nature because it emits dangerous greenhouse gases due to improper fuel burning. But by mixing it with ethanol, you can improve the performance and save the environment.

But it also shows negative impacts if misused. So to avoid unwanted situations, always use the correct fuel mix and do not exceed the ratio from 10 percent of ethanol.

For chainsaw engines, you should use the fuel-specific for two strokes, and you can also use e5 or e10 fuel but not more than e10.

This is me Sonnet. I manage a full-time workshop for my clients’ woodworking projects. From a very young age, I’ve been always passionate about DIY projects. And that’s the reason I’m amicable with the woodworking tools. I’m regularly handling a couple of projects like cabinets, furniture, boats, and many more using wood, veneers, and laminates.